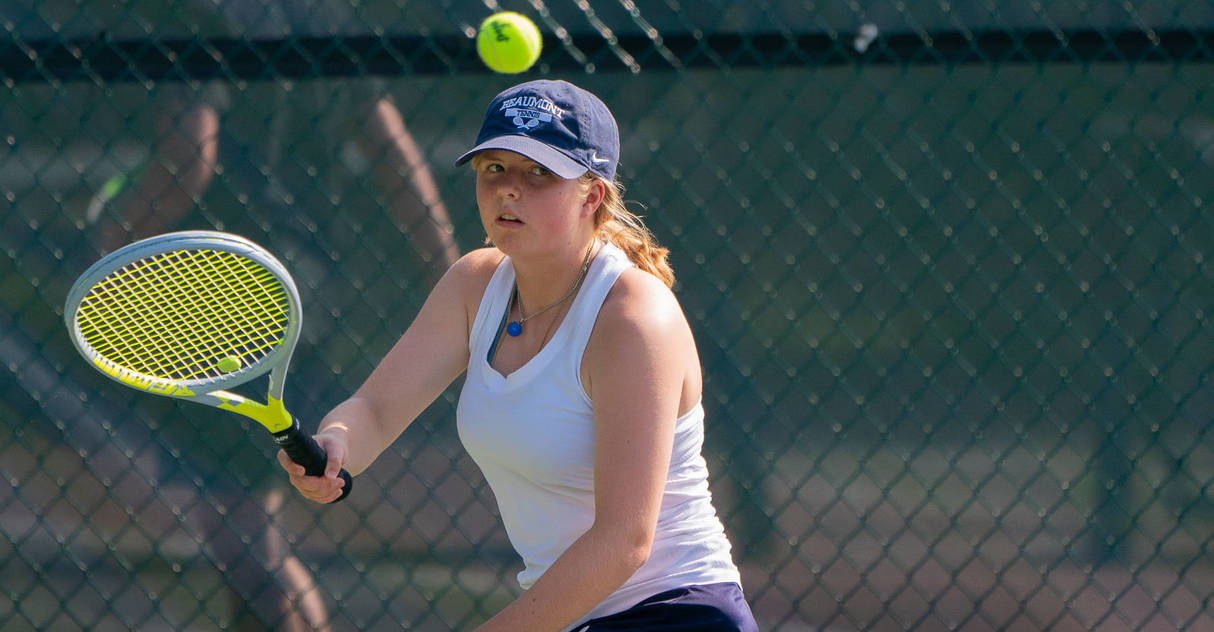 Tennis is the school’s first organized athletic activity established in 1970. Not long thereafter, Lisa Jones ’81 became the first tennis player at Beaumont to compete in the state tournament, reaching the second round of singles play in 1979. She is joined by three other Beaumont tennis players to reach the state tournament in singles play: Kristen Swenson ’07 in 2006, Molly Drake ’08 in 2007, and Caitlin Lawless ’12 in 2011.

Lawless teamed with her sister Erin ’11 to reach the state tournament in doubles play. The Lawless sisters qualified for the 2010 OHSAA State Championships.

Beaumont tennis proudly upholds the school’s tradition of academic excellence among student-athletes and regularly produces recipients of the Ohio Golden Racquet Award which is presented yearly by the Ohio Tennis Coaches Association to seniors for a combination of playing varsity tennis and academic achievement.

In 2013, head coach Mike Pellechia, put his own spin on the “Golden Racquet” moniker by starting a friendly neighborhood rivalry with Cleveland Heights High School. The Blue Streaks have a 6-3 record in the Golden Racquet series over the Heights Tigers. The coveted prize is an actual racquet painted gold that the winners take back to their respective schools, along with bragging rights for the year.

In 2019, Blue Streaks were North Coast League White Division champions in what was the final conference tournament before the League dissolved into the Crown Conference.

Gianna Velotta ’20 won the third singles title while Beaumont won both doubles championships: KK McNeill ’21 and Jackie Patton ’21 were the first doubles champions while Lena Stewart ’21 and Carlson Jones ’22 came out on top in the second doubles bracket.

The program finished with a 10-8 record during the 2020 season and Jones reached the sectional quarterfinal round.

In August of 2021, the team began the season by scoring 40 points to claim the team title at the Lakewood Doubles Tournament.

Mike Pellechia has been with Beaumont since 2012. He has a strong passion for tennis and has built a program that balances competition and leadership on and off the court, leading a team with the highest GPA among the fall sports at Beaumont.
Visit Beaumont Blue Streaks Site