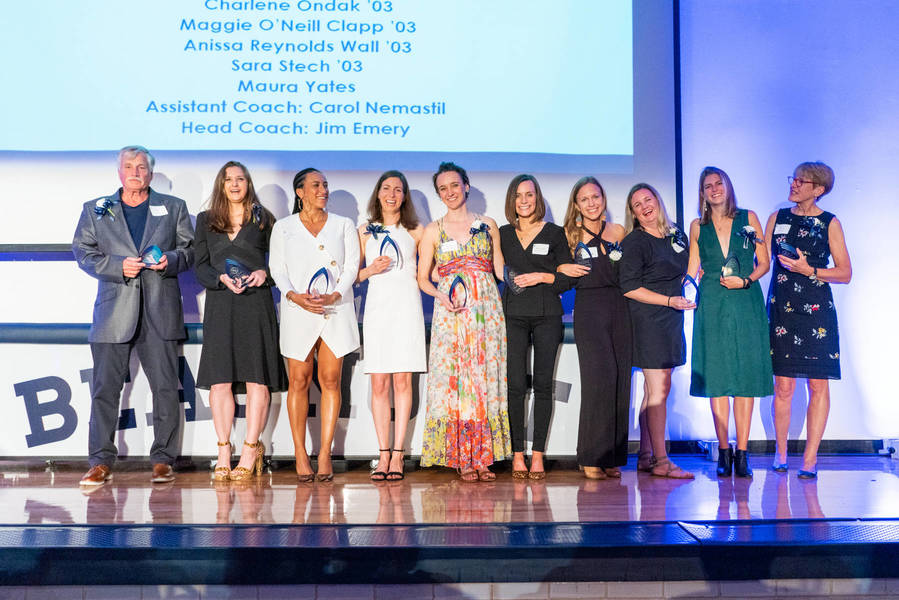 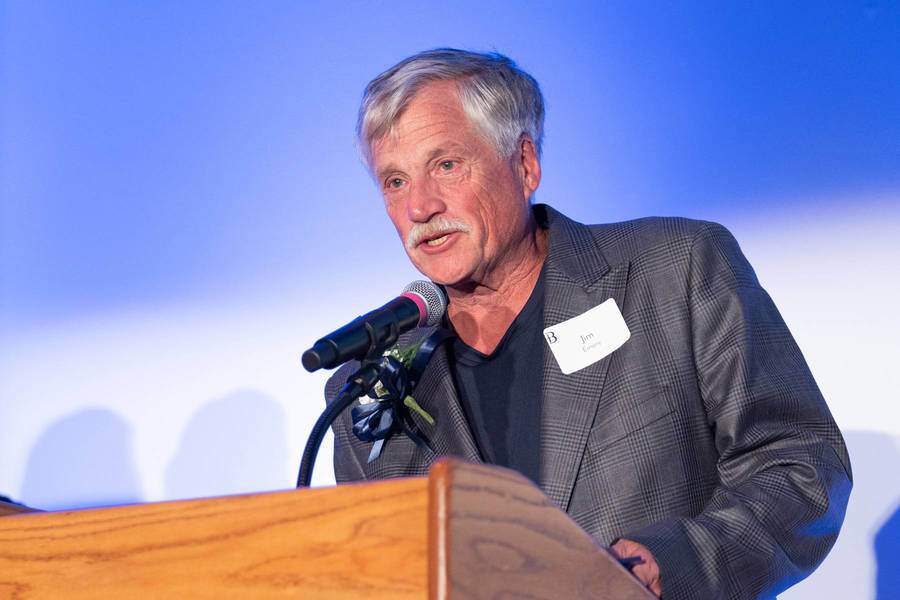 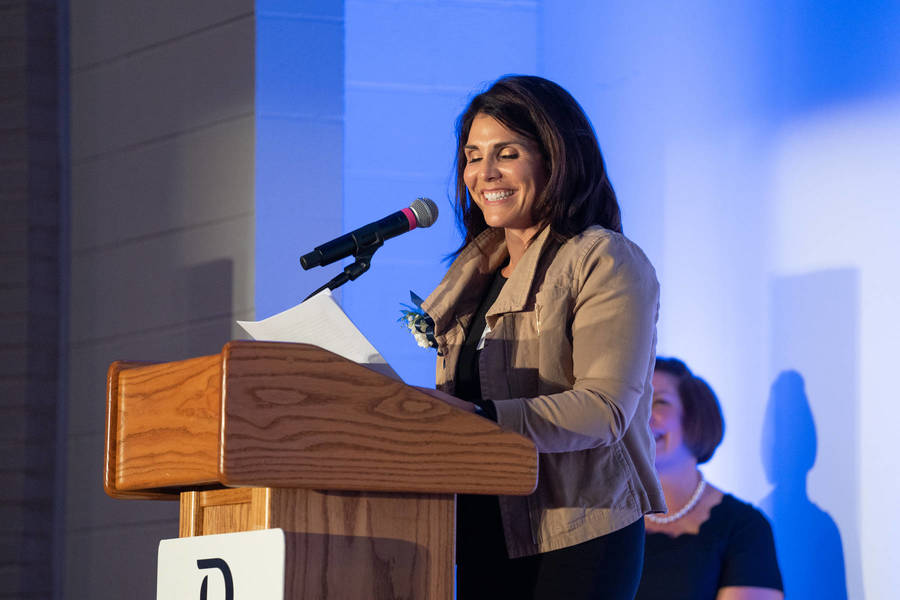 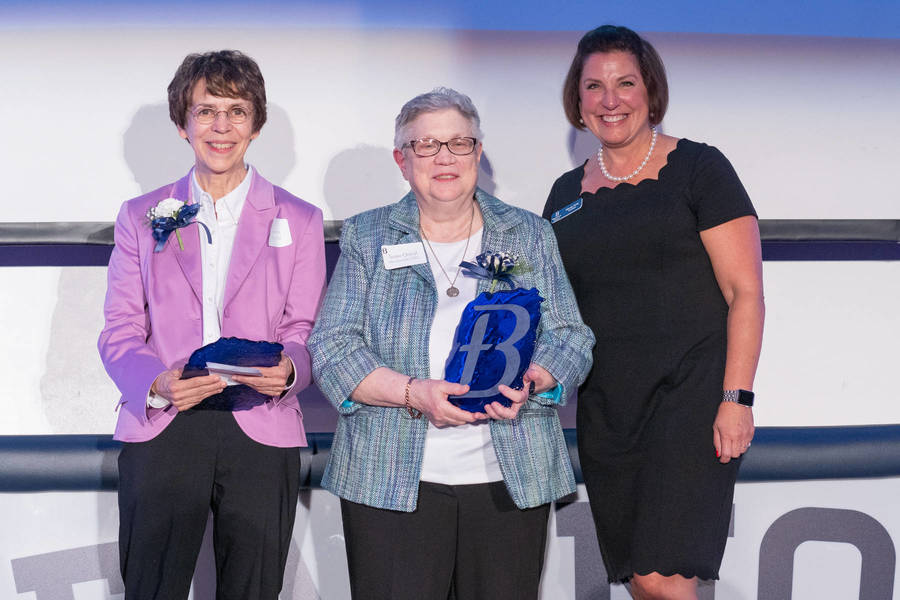 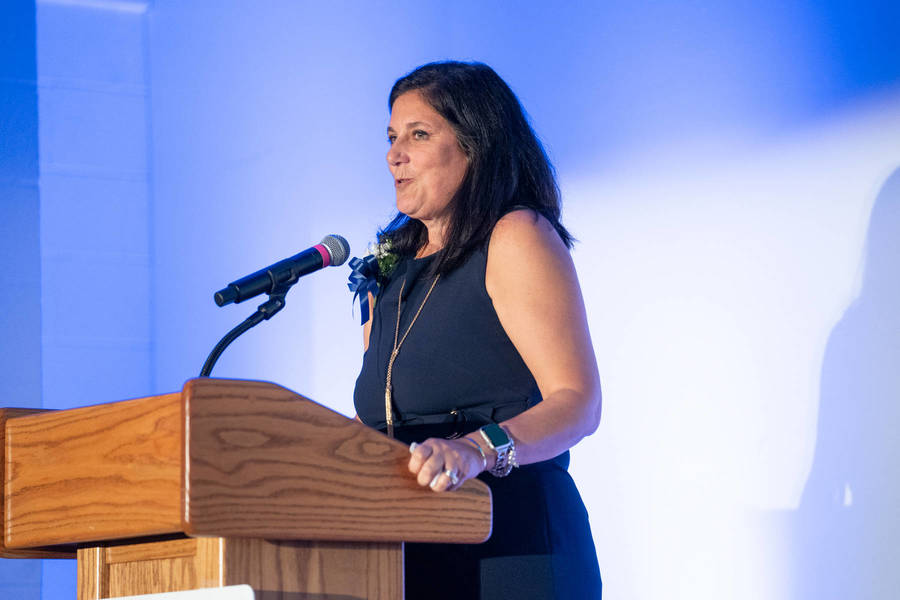 To view the photos from the evening, click here.

Congratulations to the 2019 Presidential Award Winners and Athletic Hall of Fame Inductees:

Coach, Track & Field and Cross Country
Coach Jim Emery, our second coach inducted into the Beaumont Athletic Hall of Fame, is being recognized for his commitment to Beaumont Cross Country and Track & Field over the past 28 seasons. He is dedicated to his runners’ success, planning and strategizing for them even after practices and meets and long after the season has ended. Coach Emery’s many accomplishments include, in Track & Field: coaching, motivating and training over 60 All-Ohio athletes with 24 State Championship appearances. He coached 11 of Beaumont's 16 state titles, 3 state runner-up finishes, and has the most state titles won in four events: the 4x800m relay, 800m race, 1600m race, and 3200m race. In Cross Country, Coach Emery coached 15 All-Ohio athletes, made 16 State Championship appearances, coached all 7 of Beaumont’s state titles, had 8 regional championships, and 7 district championships. He created a culture of excellence at Beaumont in both sports, and has been the standard of success for other coaches in the area and throughout Ohio.

Athletic Hall of Fame Induction: Individual, Golf
Lesley Monachino Bertin ’02, was a Varsity golfer ranked #1 from her freshman through senior year, and was the first Beaumont golfer to qualify for the state tournament and medal in 10 of 12 tournaments Beaumont played in Fall of 2001. Her accomplishments include: 2001 Plain Dealer Girls Player of the Year and Plain Dealer North Coast Junior Tour Player of the Year, 3-time Player of the Week (1999, 2000, 2001), Most Outstanding Freshman, Golf 1998, Beaumont Golf MVP 3 years (1999, 2000, 2001) and Team Captain 2000 and 2001. Lesley was First Team All Ohio, placed 5th overall at the Ohio State Tournament, and 2nd overall at the Sectional Tournament. Lesley went on to play Division 1 Golf at the University of Richmond for all of her four years.

Athletic Hall of Fame Induction: Team
State Championship Cross Country Team 1999, coached by Jim Emery, won the District, Regional, and the State Championship in the Fall of 1999. This talented team comprised a group of 10 exceptional young women, 8 of whom were Freshman. The raw talent of these novice runners combined with leadership of the few upperclassmen created strong bonds that sustained through the season and beyond graduation. This special group of young women repeated their titles in 2000 as well.

Distinguished Alumna Recipient
Dr. Rita Hanna Pappas ’84, is our Distinguished Alumna for her dedication to service and leadership. She serves the Cleveland Clinic Pediatric Institute and her patients in the highest leadership role, overseeing 350 physicians and 1000 care specialists. She is one of only two female Institute Chairs at the Cleveland Clinic. Rita is an advocate for children in the State of Ohio and was pivotal in working with our state legislators to pass CHIP (Children's Hospital Insurance Plan). CHIP is now in place to help families that are not able to cover all of the costs of their health care bill. As a supportive mentor she guides with her strong faith her family and the people she works with every day who seek her guidance both personally and professionally. She is a true leader who is generous with her time, leading many to call her a friend. As a Beaumont parent, (Hanna Pappas ’19) Rita is an avid fan of the Blue Streak basketball team, and has spoken to the student-athletes about women in leadership. She has been a Career Day presenter sharing her journey from the nursing profession through medical school and becoming a physician. Beaumont is proud to include Dr. Rita Pappas in the company of our most distinguished alumnae.

Beaumont Award Winner
Sr. Cheryl Mentkowski, OSU, who entered the Ursuline Sisters in 1981, came to Beaumont as a Theology and Social Studies teacher in 1985. She has spent her entire academic career, 34 years, at Beaumont serving in a variety of capacities. She was a long-time member of the Social Studies department and teaching primarily classes in American History and American Government. Her wide-ranging roles at Beaumont have included: Senior Class Moderator, Junior and Senior Homeroom Teacher, Social Studies Department Chairperson, Liturgy music and song leader, Fathers’ Club Moderator, Project Real Coordinator, Director of All-School Fundraising Drive, Principal’s Advisory committee member, and as a Member of Academic and Spirituality Committee of the Beaumont Board of Directors. Her most memorable roles include: playing Rhett Butler in a skit to boost candy sales for the all-school fundraiser, songwriter and chief cheerleader for Beaumont sports and academic groups headed for state competitions, honing her trivia skills as the Academic Challenge advisor, a brief stint as Director of the Drama program and serving as NHS Advisor for 22 years (and counting). Sr. Cheryl currently serves as Beaumont Mission Integration Director.

Beaumont Award Winner
Sr. Ann Wojnar, OSU, Ursuline Sisters have always been forward thinking in providing advanced education for the sisters who taught in their schools. Sr. Ann Wojnar has been one of Beaumont’s most forward-thinking educators since she began at Beaumont in ----. She pursued one of the earliest degrees in Computer Science at Columbia University in New York, and armed with her Ivy League education recognized an entirely new approach in acquiring, storing, and transmitting information. Sr. Ann set out to convince the Beaumont administration that computer technology was the wave of the future and should be integrated into the Beaumont curriculum at all levels. At that early date, few administrators would have the foresight, not to mention the budget, to fund a transition from the established typewriter/encyclopedia/mimeograph machine method to this new computer technology. However, in true Ursuline fashion and with the support of then Beaumont principal, Sr. Margaret Ann Kelly, Sr. Ann used the famed Ursuline strategy referred to as dynamic adaptability. She found a way to fund her vision by engaging in a bit of “imaginative entrepreneurship.” Recognizing that Beaumont students at the end of a long school day require sustenance, she created a unique round sandwich board and went to the epicenter of all Beaumont activity - The Foyer - dressed as an M & M and sold boxes of M & M’s candy to the student population every day after school. With the money she earned she created the first Beaumont computer room one computer at a time. Sr. Ann, even with her reserved and private nature, moved Beaumont into the computer age and established a standard of innovation, persistence and creativity which are hallmarks of an Ursuline education. The computer room which Sr. Ann created through a combination of ingenuity and grant writing has prepared thousands of Beaumont women for their lives and careers. Truly, Sr. Ann followed the vision of St. Angela as a living example of her mission, to change the world around you for the better.